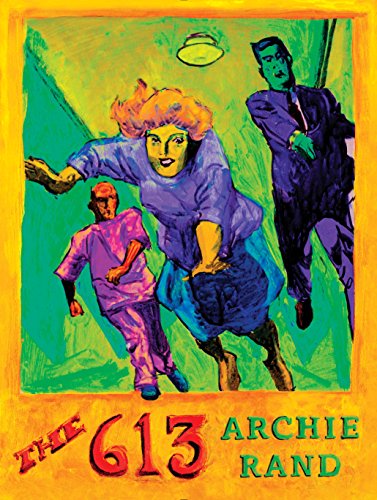 Artist Archie Rand creates a glorious reimagining of the 613 Jewish commandments using comic strips and pulp fiction jackets to capture each mitzvah. A gift for the eyes, this unique collage of images, ranging from Lox to superheroes, is not your Bubbe’s graphic novel.

"If Leviticus seems an unlikely text for a comic strip, look again. Or rather look at Archie Rand's magnificent series of commandments, The 613. The beauty, terror, and fun are all there in one magic, mesmerizing wall of colored shapes and visual oratory. It's a splendid series."
—John Ashbery

“[R]ichly colored, always stirring works of visual art…[The 613] is something like seeing a cinema-sized version of ancient wisdom transmuted through a comic (and then blown up again).”
—Flavorwire

Archie Rand's career as an artist spans five decades and myriad themes and genres. Among his pioneering explorations, The 613 is surely one of his most ambitious feats yet. Without any idea where the work would be exhibited, Rand began transforming each and every one of the 613 mitzvahs, or commandments, into its own breathtaking painting, a series that took five years to complete.
Each of the gorgeous and perplexing panels features a vibrant, unexpected image that brings forth the heart of its law and commands our eyes to linger. Rand is startling and original in his rich color choices, bold characters, and extraordinarily expressive approach. The New York Times describes the paintings as "rendered in the style of comics and pulp fiction book jackets, a dash of Mad magazine, a spoonful of Tales of the Crypt, some grotesques, some superheroes, always action, emotion, drama." Whether grotesque or dramatic, each painting provokes a sense of wonder and self-reflection, making The 613 a book to be visited time and time again. Perfect for readers of art, religion, or popular visual culture, The 613 may be the most audacious and distinctive gift book of its kind.